Things have evolved here at home.  I’m sleeping back in the hospital bed as a concession to my caregivers.  They did not ask me to do it, but since I’m the one dying I did not want to kill them in the process.  I said goodbye to the Sara Stedy for transfers because I was losing the upper body strength necessary to use it.  It was getting too difficult to get out of the lift chair safely.  I’ve transitioned over to the Hoyer lift and it’s not bad, not that I ever thought it would be.  But I know there were people out there who doubted I would willing convert.  As I felt my strength leaving, I was begging for my caregivers to use the Hoyer.

Washing and dressing are the longest part of my day.  Sometimes I need a nap afterwards.  Dressing is done in bed now.  Basketball pants with snaps up the outside of both legs and skirts are becoming my new apparel.  I’m still fighting against going commando so I’m searching for someone who wants to help me adapt clothes.  Since I know how to sew, it may turn out that I will have to teach my husband how to make the adaptations.

My husband is now on a leave of absence from work.  It turns out that he is my only untrained caregiver allowed by law to operate all the equipment I need.  I won’t go into the absurdity of that.  His awesome co-workers have donated almost six weeks of time to him; something I think is amazing.  I am anxiously awaiting warmer weather so we can travel the neighborhood walking trails.

My community has a volunteer organization, Woodlake Cares, that helps neighbors in need.  They do not perform personal care though.  One day while I was out on the trail I met a friendly neighbor Suzanne.  Suzanne  slowed down her pace to walk along with me and my aide.  She wanted to learn about ALS and me.  That chance meeting spawned a new volunteer group that joined with my church community to form Woodlake Cares 4 Kathryn.  Awesome and amazing, isn’t it?

Also amazing to me is the help I have been given by Team Gleason.  As I mentioned in a previous blog (Trick-or-Treat, Nov. 5, 2017), Team Gleason is a charitable foundation formed by Steve Gleason who played professional football for The New Orleans Saints from 2000-2008.  He was diagnosed with ALS in 2011.  The mission of Team Gleason is “to generate public awareness for ALS, raise funding to empower those with ALS to live a rewarding life, and ultimately find a cure” (teamgleason.org, 2016a.).

In the evenings when my husband removes his hearing aids, it is even more impossible to communicate.  I was looking for a floor stand for my eye-tracking device so I could have it bedside to communicate with my husband.  New stands cost upwards of $1,200.  My husband searched the internet for a used stand and found one for $950.  I told him to hold off on purchasing it.  I wanted to post in one of the ALS forums I joined on Facebook to see if anyone there had one to offer.  I quickly received responses.  A few people told me their devices came with both wheelchair and floor stands; something I was told was not possible for me.  Then a message popped up from Team Gleason.  They offered to send me one free.  Two days later it arrived.  Brand spanking new, no red tape, and no strings attached.  Unbelievable!

I was also having trouble transferring to my wheel-in shower chair.  It cost me almost $600 when I bought it.  (Why so pricy?  Duh!  Because you are handicapped and need it.)  The transfer from the Hoyer lift was making it difficult to get seated properly.  My husband was overwhelmed by the multitude of chairs available for sale.  How did we know it would work?  Was it a good quality?  They were not returnable.  He decided to call the experts at Team Gleason for advice.  After all, they organized Team Gleason House which was planned specifically “for Innovative Living is a new residential facility designed to help people diagnosed with incurable neuro-muscular disorders live more independently” (teamgleason.org, 2016b.) so we knew they had the knowledge.  His email was returned with a request for his phone number.  Two minutes later he received a call.  They understood and offered me a custom-built shower chair.  Again, no red tape!  How do you thank someone and their foundation for their generosity?  You SHOUT IT OUT HERE for the world to read.  Thank you Steve Gleason and Team Gleason for your generosity.

Blog interrupted.  I was interrupted writing this blog post on March 15th when I had to suddenly go to the ER.  I had planned to meet with a funeral director that day to arrange  my final plans and continue living.  But my aide noticed how swollen my left leg had become.  A quick call to my doctor sent me to the ER.  Once I left the house anything and everything went wrong.  I was triaged and then called in for a sonogram of my leg to check for a blog clot.  Oops, you’re in a wheelchair!  They didn’t want to inconvenience me with a Hoyer lift, picking me up to be put on a stretcher and then picking me up to go back in the wheelchair.  So it was back to the waiting room.  Waited some more and got called again.  Oh, now it was decided that they could perform a sonogram from my wheelchair.  Amazing!  The wheelchair had the same ability to recline as earlier.  Guess they just figured it out.

We had arrived around 11:30 a.m. before the crowds, but it took several hours to get a room in the ER.  Unlike other hospitals I’ve been in, Duke has actual rooms in the ER for patients.  Once you’re in the room you get the feeling you are locked away from everyone, abandoned.  I hadn’t taken any of my medicine that day and no one was in a bother to get it for me.  I guess the ER  staff was busy, but doing what I have no idea.  It took two requests to get a head pillow.  I was put on the ER stretcher where I was left for 8 or 9 hours.  It was like murder.  My sensitivity due to neurological problems and the inability to move kicked in and it felt like my buttocks was burning. I cried and screamed for relief; my PBA was in full swing and I let it rage.  Instead of simply moving me, I was offered morphine!  Morphine would slow my respiratory system.  How could it be that no one understands ALS in a hospital with a renowned ALS Clinic!  You would think a neurologist would be called in to consult for a patient with a neurological disease.  That only happens on TV.  Finally I got two more pillows placed beneath me.  That solved the problem.  Morphine versus pillow.  Smh.

Around midnight I finally got a hospital room, but only because my husband went home to get my Trilogy machine.  The admitting doctor had never heard of Trilogy and said I would need to go to the respiratory ward which had no bed available until the next day.  Not happening!  So off my husband went to get my machine from home leaving me under the watchful eye of a friend who had joined us and knew her way around the medical nonsense.  About ten minutes after arriving at the valet my husband learned that they had killed our van’s battery by leaving the transmission in neutral and the lights on.  Now he needed a jump at 12:30 a.m.  On his way back to the hospital, our friend had to call to tell him the hospital pharmacy did not carry one of my ALS-related medications.  (Again, this is a hospital with a renowned ALS Clinic.)  So again he went back home.  At 1:30 a.m. we kicked our friend out so she could rest up for her next day at work.  It was an exhausting day.

The good news in all of it was that the staff on the hospital floor are excellent.  The nurses and nursing assistants are great at what they do, although I was their first ALS patient.  The doctors did not know much about ALS so if you cannot speak, you had better have an advocate with you.  Communication for me came down to shaking my head.  No one has the patience to wait for your speech device.

In the ER with my friendly Angel Eileen

My FU to ALS 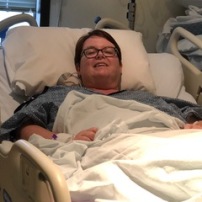 In the comfy bed

The final result is that I have two blood clots, one in my left leg and one in my lungs.  I will be on blood thinners for life.  FU ALS.

I have ALS. It sucks. This blog will follow my journey with ALS (Lou Gehrig's Disease). View all posts by Kathryn Manginelli

Learn more about ALS by clicking this link.

See how other PALS are coping. Shelly is in her 5th year living with this disease.  Read her blog by clicking here.